This morning the 2020 BIFA nominations were revealed, and we are thrilled to see various Film London alumni and funded productions from the longlists below nominated!

Continue reading as we go through the longlist of alumni in more depth.

Four alumni have been long listed for the Douglas Hickox Award, honouring outstanding debut directors. Rene van Pannevis earns a nod for Film London Microwave funded Looted- the feature length version of Film London funded short Jacked (2015). Based on the director's own experiences and starring Charley Palmer Rothwell (Legend) and Thomas Turgoose (This Is England), the film focuses on life in an economically-stricken coastal town for a group of young people just trying to get by. Rene van Pannevis has also been long listed for Debut Screenwriter and 2020 Film London Lodestars Jennifer Eriksson and Jessie Mangum are up for Breakthrough Producer for the feature. The film recently hit the silver screen, and is now available to watch on-demand.

2019 Film London Lodestar Rubika Shah's White Riot- a documentary combining interviews with archive footage focusing on the 1970's protest movement Rock Against Racism, has gained considerable critical acclaim over the course of the year, winning the Grierson Award for Best Documentary at the 2019 BFI London Film Festival and is now long listed for both Debut Director and Best Documentary. Like Looted, White Riot is a feature length version of a 2017 Film London funded short of the same name.

Claire Oakley and Aneil Karia also make the long list for titles Make Up and Surge respectively, with Oakley also featuring in in the Debut Screenwriter list. Oakley made short film Physics with us back in 2012, whilst Karia made Switch in 2017.

Filmmaker Lucy Brydon has been long listed for Debut Screenwriter for her Microwave funded debut feature Body of Water, exploring the complexities and impact of an eating disorder on both the individual and surrounding family members. The film was released this October, and available to watch on-demand.

Rajita Shah makes the Breakthrough Producer long list for Love Sarah. Shah produced And It Was The Same With My Son via Film London back in 2016, telling the story of a British Muslim mother who has lost a child to radicalisation. Shah then attended Film London's Production Finance Market New Talent Strand a few years later looking to connect with financiers and forge new relationships.

Numerous alumni make the long list for Best British Short Film for their producing roles, chosen from over 300 entries! Sorcha Bacon (also a 2019 Film London Lodestar), Tom Gardner, Tom Wood and Fiona Lamptey are amongst those listed, all coming through the Film London doors on various funded shorts and initiatives.

Sorcha produced BAFTA and BIFA nominated London Calling short Wren Boysin 2017, whilst Fiona, who participated in our Breaking the Glass Ceiling leadership programme in 2019, and was recently appointed as Netflix's new Director of UK Features.

Nominations for the 2020 BIFA's will be be announced Wednesday 9th December. Winner announcements will take place in February 2021.

BAFTA Breakthrough highlights exciting and emerging talent in film, TV and games, giving them access to career development and mentoring opportunities to prosper in their chosen field.

We are thrilled to see 2019 Film London Lodestar and producer Joy Gharoro-Akpojotor, Rubika Shah and director Aleem Khan as part of this year's group.

Explore our funding offer, including production schemes and training bursaries 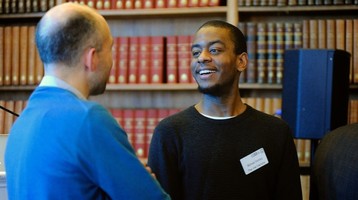 Supported by the Mayor of London, our Equal Access Network works to ensure the capital's screen industries represent the diversity of the city itself. Find out more here