Margaret Salmon lives and works in Glasgow. Taking an intuitive and often improvised approach to the camera, Salmon trains her eye on an intimate cast of family, friends and local subjects. Her films are a chronicle of the everyday, of the emotive connections between people, and of their relationship to the worlds they inhabit. Adapting techniques drawn from various cinematic movements, such as Cinema Vérité, the European AvantGarde and Italian Neo-Realism, Salmon's orchestrations of sound and image introduce a formal lyricism into the tradition of realist film.

Margaret Salmon won the first Max Mara Art Prize for Women in 2006. Screenings include CPH:DOX and ICA, London. Her work was shown at the Venice Biennale in 2007 and the Berlin Biennale in 2010 and has been featured in solo exhibitions at Witte de With, Rotterdam; Whitechapel Gallery, London and Tramway, Glasgow amongst others. 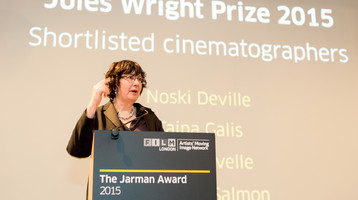 Margaret Salmon was one of four female creative technicians shortlisted for the Jules Wright Prize in 2015. Find out more