John Akomfrah is a hugely respected artist and filmmaker, whose works are characterised by their investigations into memory, post-colonialism, temporality and aesthetics and often explores the experiences of migrant diasporas globally. He was shortlisted for the Jarman Award in 2014, and in 2020 was announced as a Film London Jarman Award Patron.

Akomfrah was a founding member of the influential Black Audio Film Collective, alongside the artists David Lawson and Lina Gopaul (Smoking Dogs) who he still collaborates with today. Their first film, Handsworth Songs (1986) explored the events surrounding the 1985 riots in Birmingham and London through a charged combination of archive footage, still photos and newsreel, which won several international prizes. Solo exhibitions include: Eli and Edythe Broad Art Museum, Michigan, USA (2014); Tate Britain, London, UK (2013-14) and a week-long series of screenings at MoMA, New York, USA (2011). Akomfrah debuted Precarity (2017) at Prospect 4 New Orleans, following the life of forgotten New Orleans jazz singer Charles 'Buddy' Bolden. He was awarded the Artes Mundi Prize in 2017 and participated in at the first Ghana Pavilion at the 58th Venice Biennale in 2019. He is represented by Lisson gallery.

John Akomfrah is a Patron of the Film London Jarman Award, an annual prize for UK artist filmmakers. Find out more 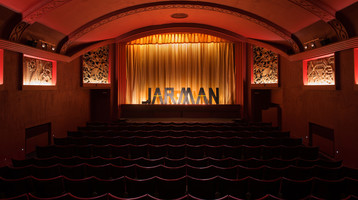 John Akomfrah was shortlisted for the Jarman Award in 2014. Find out about the other shortlisted artists