Jasmina Cibic lives and works in London. Her practice spans film, installation and performance, employing a range of methodologies, media and theatrical tactics to redefine or reconsider a specific ideological formation and its framing devices such as art and architecture. Her work draws a parallel between the construction of national culture and its use value for political aims, encouraging the viewer to consider the timelessness of psychological and soft power mechanisms that authoritarian structures utilise in their own reinsertion and reinvention. 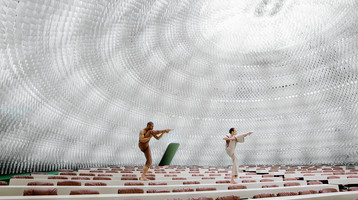 Find out more about Jasmina Cibic's project, which was commissioned through FLAMIN Productions in 2019