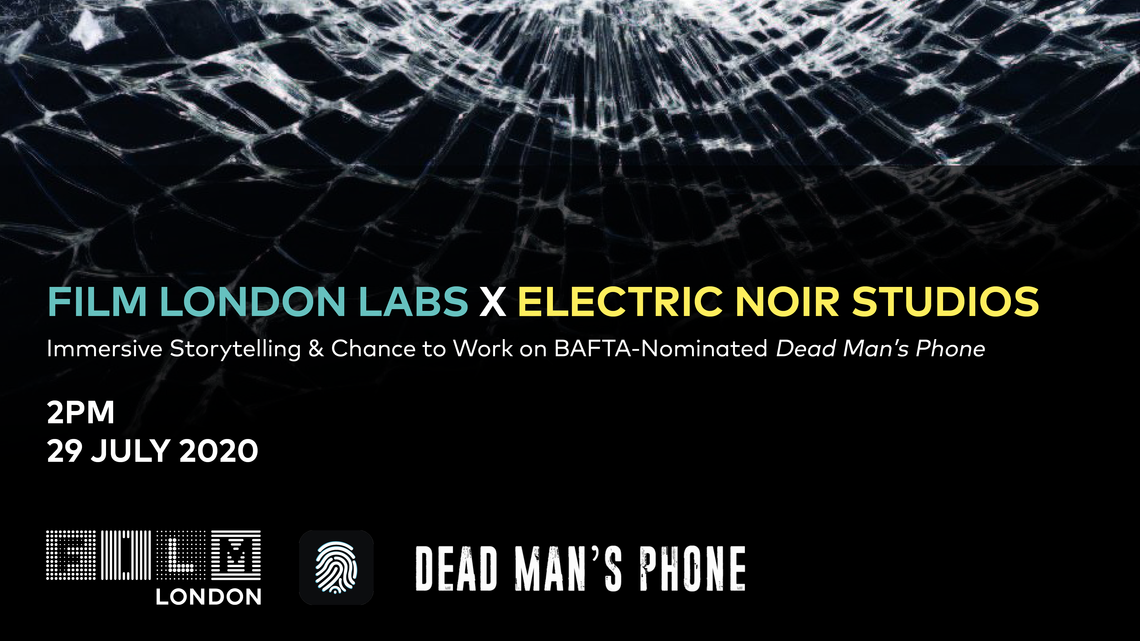 We’re pleased to announce that Electric Noir is now on the hunt for innovative, engaging storytellers—with the goal to bring someone on board for a paid, 3-month stint developing their own season of the BAFTA-nominated series, Dead Man’s Phone.

The Series, and the Opportunity

At its core, Dead Man’s Phone is a long-form narrative that intersects gaming, TV and film. Through Electric Noir’s bespoke mobile platform, the player becomes the lead character in a crime drama and solves a murder using clues found on the smartphone of a victim. It’s rich with flawed characters and challenging cultural themes—more akin to the depth and nuance of The Wire or Top Boy than a conventional police-procedural.

As we navigate our current political reckoning with law enforcement and seek to break apart and better the systems that govern us, this is an opportunity for a bold, socially engaged screenwriter to tell stories that reflect – in both form and content – the world we live in.

Filmmakers interested in this opportunity will apply by submitting a creative writing sample to Electric Noir (see brief below). No prior experience in immersive tools is necessary.

For full information on the opportunity and the details on submitting your creative brief, please see below.

We welcome any questions at labs@filmlondon.org.uk

Interactive entertainment studio Electric Noir is looking for screenwriters to create their own season of the BAFTA-nominated series, Dead Man’s Phone.

The right candidate does not need any experience in interactive & mobile game storytelling – they will be trained in these elements.

Five stages to the process:

v) three-month paid placement (for at least one writer)

Electric Noir has a shared workspace in central London and will aim to bring candidates together here during the bootcamp and placement – with remote working possible between training sessions.

Dead Man’s Phone is a live-action mobile app where you, the detective, investigate and solve murders through the smartphone of victims. It sits right in the middle of the space between film and gaming.

Season 1 of Dead Man’s Phone was nominated for a BAFTA for best mobile game 2020. You can see the trailer/download season one beta (iOS & Android)

The studio, Electric Noir, is bridging the worlds of film, television and gaming. Bringing adult storytelling into the mobile game space. Think, ‘the HBO of story games’.

Dead Man’s Phone is an interactive series with high ambitions.

We want to elevate interactive stories as an art form alongside cinema and television. To create long-form mobile narratives – rich with flawed characters and challenging cultural themes.

We may be a crime drama, but better to think The Wire or The Sopranos – not CSI or NCIS.

This brief – writing a police interrogation scene – is to assess your talent for writing in that tone and working within an existing narrative.

We’d also ask you to submit one piece of your own work that you’re most proud of – this could be anything from your portfolio (a script, a link to a short film, etc).

We believe all our interactive tools can be taught. But that raw instinct for great dialogue should be within you.

In the Electric Noir two-week bootcamp, up to five writers will work closely with the founding creative team – who will guide you in the process of interactive storytelling in our phone-first format.

Our ambition for this bootcamp is for you to:

After the two-week bootcamp, at least one writer will be given a three month paid placement to develop a season of Dead Man’s Phone with guidance from the founders.

All writers will be fully credited in any series that goes into production.

Find out more about Electric Noir.