Raft of the Medusa Video

A film by Richard Heslop, a radio play by Simon Armitage. Set in the near future, after months of continuous rain all coastal areas of the UK are flooded. Bella and Jude are marooned on their farm in Kent with dwindling supplies, made all too clear by the arrival of a stranger who 'floats' in.
This radio drama was inspired by Derek Jarman and provided the soundtrack to a film by Richard Heslop, which was presented on the Radio 4 website.
Shortly before his death in 1994, Jarman was considering making a film based on Theodore Gericault's The Raft of the Medusa which depicts a group of desperate men, abandoned on a raft at sea. He wrote about it in his notebook, but the film was never made.
Taking clues from Jarman, Simon Armitage's radio drama is also inspired by flood and isolation. Richard Heslop worked as Jarman's cinematographer and his accompanying film is inspired by Jarman's passion for painting and colour as well as Armitage's script. The music is by another of Derek Jarman's collaborators, Simon Fisher Turner.
A Cast Iron Radio and Film London Artists' Moving Image Network production for BBC Radio 4
Supported by Arts Council England. 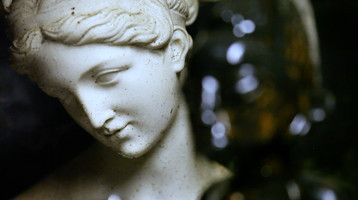 Raft of the Medusa