The final resting place of the Romanov family - the last Russian royal family who were executed in the 1917 revolutions, has always been contentious. Historians and the church have endlessly argued over the bodies found in Yekaterinburg. But in 2015 the issue was settled when the church agreed to bury the verified remains of the family together at last. But this is not the whole story. One member of the family did evade the Bolsheviks, living many years after the revolution. That being Joy, the Romanov’s prized dog.

After being found wandering the forests by a British radio engineer Joy was taken back to Windsor, England to live out her life in the shadow of the British monarchy. Many years later Joy was buried in the garden of her new owners home, a home that was redeveloped as a factory producing ophthalmic equipment for eye testing. Now this dislocated history howls under the surface threatening an ecological revolution to come.

Pedigree is an animal invasion movie about the stories we tell about dogs and revolutions. Filmed at the factory where Joy was buried by both humans and dogs the film utilises a mongrel mixture of found, produced and processed materials to affectively trace the decentralised & domesticated legacy of the Russian revolution. Part true shaggy dog story, part feral historiography the film plunges through the dark recesses of the earth, along the way exhuming local traumas and messy 20th century desires in order to contemplate our contemporary liberatory imagination. 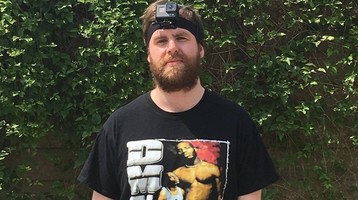