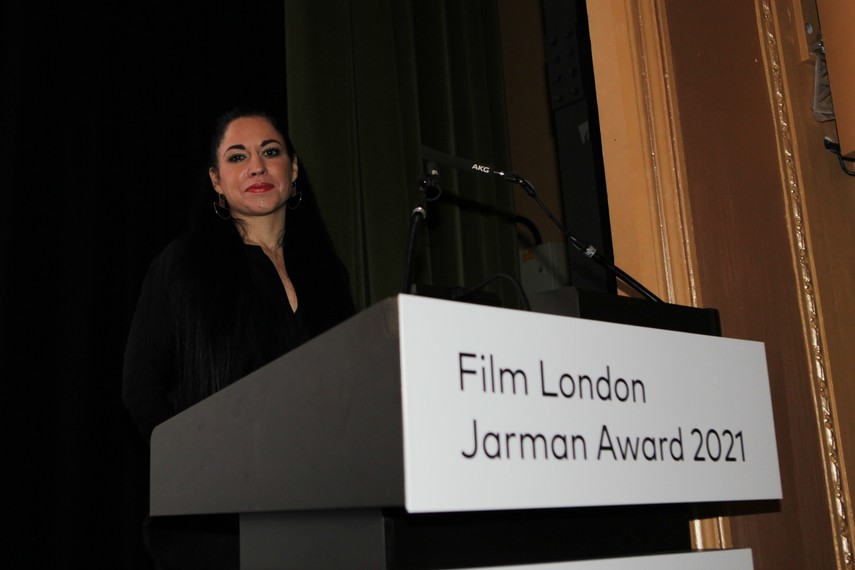 Jasmina Cibic has won the 2021 Film London Jarman Award, it was announced this evening at a special event at Regent Street Cinema.

Jasmina Cibic works across moving image, sculpture, immersive installation and performance. Her stylish, theatrical work tackles important global issues including national identity, nation building, soft power and European relations. Set in monumental architectural locations from Oscar Niemeyer’s French Communist Party Headquarters in Paris to the Palace of Nations in Geneva, Cibic uses actual transcripts of real political debates and speeches to form the dialogue of her filmworks. Cibic frequently uses dance performance in her film works, and has collaborated with choreographers and dancers on several projects, including Nada and The Gift.

In her 2019 – 2021 work, The Gift, Cibic presents an allegorical tale, a competition between an Artist, a Diplomat and an Engineer to determine which of the arts would be the most likely to heal a divided scociety. The candidates are interviewed by four women who represent the four freedoms listed by Roosevelt in his Four Freedoms speech of 1940 - Freedom of Speech, Freedom of Worship, Freedom from Want and Freedom From Fear. The Gift explores particular historic examples of political gifts of architecture, art, music and dance and untangles the seductive and sinister nature of the crossovers between culture and politics. In her work Nada (2016 – 18), Cibic examines three of European modernism’s star architects and the role their work has played in national representation during decisive moments in European history. These include Vjenceslav Richter’s unrealised design for the Yugoslav Pavilion at the Brussels World Exhibition in 1958, Arne Jacobsen’s Aarhus City Hall (1937-1942) and Mies van der Rohe’s Krefeld architecture of the 1920s. 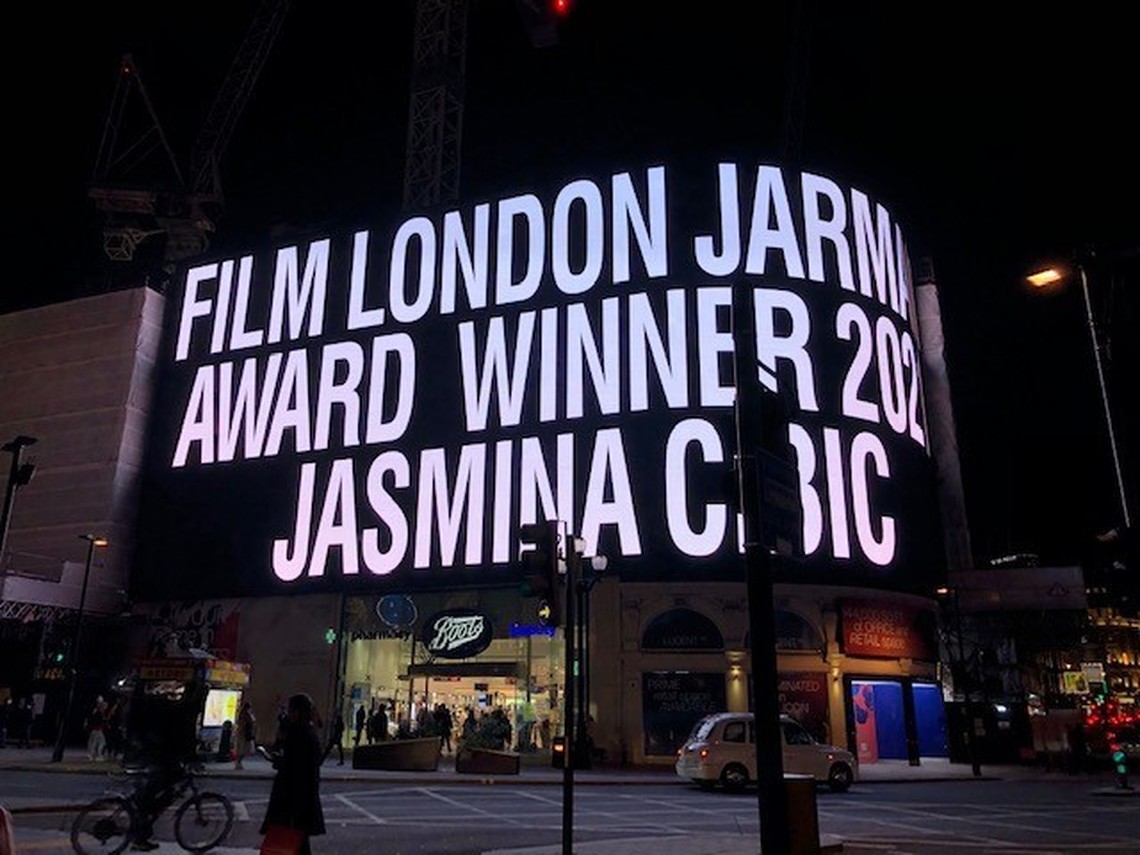 Altogether, these six artists represent an astonishing zeitgeist, a state of the art of moving image today. I know that my fellow jurors would like to join me in expressing our congratulations to Jasmina, and all those shortlisted for the 2021 Award.

Jamina Cibic was born in in Ljublijana in 1979 and now lives and works in London.

The announcement of Jasmina Cibic as winner of the Film London Jarman Award will be presented by CIRCA on the big screen at Piccadilly Circus at 8.21pm. There will also be a screening of a new work by former Jarman Award winner Hetain Patel (2019). 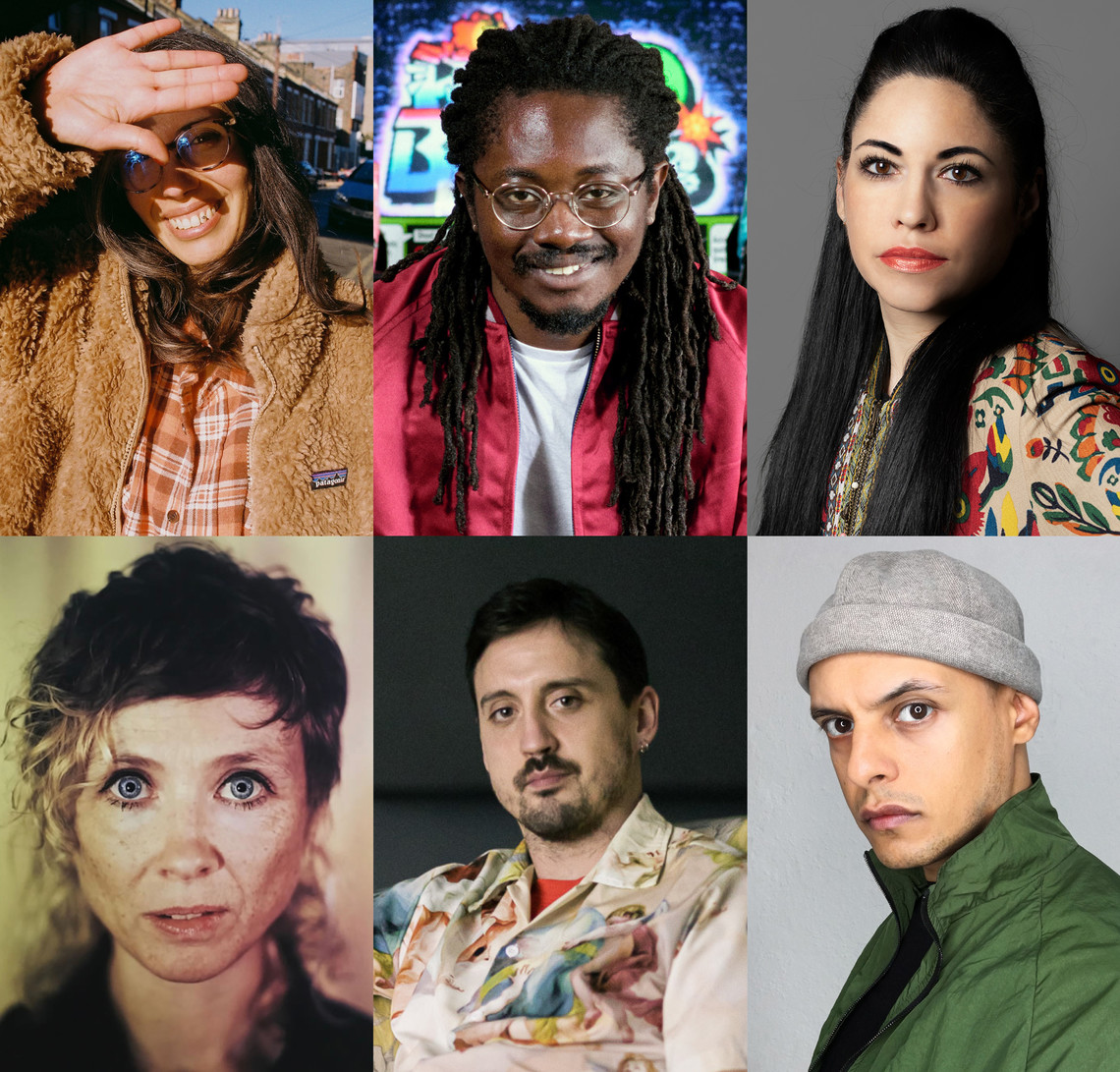 After the adversity faced over the past year, it is vital that we continue to protect and support artists to challenge perceptions, push creative practices and have their voices – and those of the communities they represent - heard. Our congratulations go to Jasmina and indeed all of the shortlisted artists – we look forward to seeing what the future holds for them. A sincere thank you goes to our funders, Arts Council England, returning partner Whitechapel Gallery and our Film London Jarman Award Patrons for all their on-going support.

The Jarman Award, established in 2008, celebrates the diversity and creativity of artists working in film today, and is run in partnership with the Whitechapel Gallery, with support from Genesis Cinema.