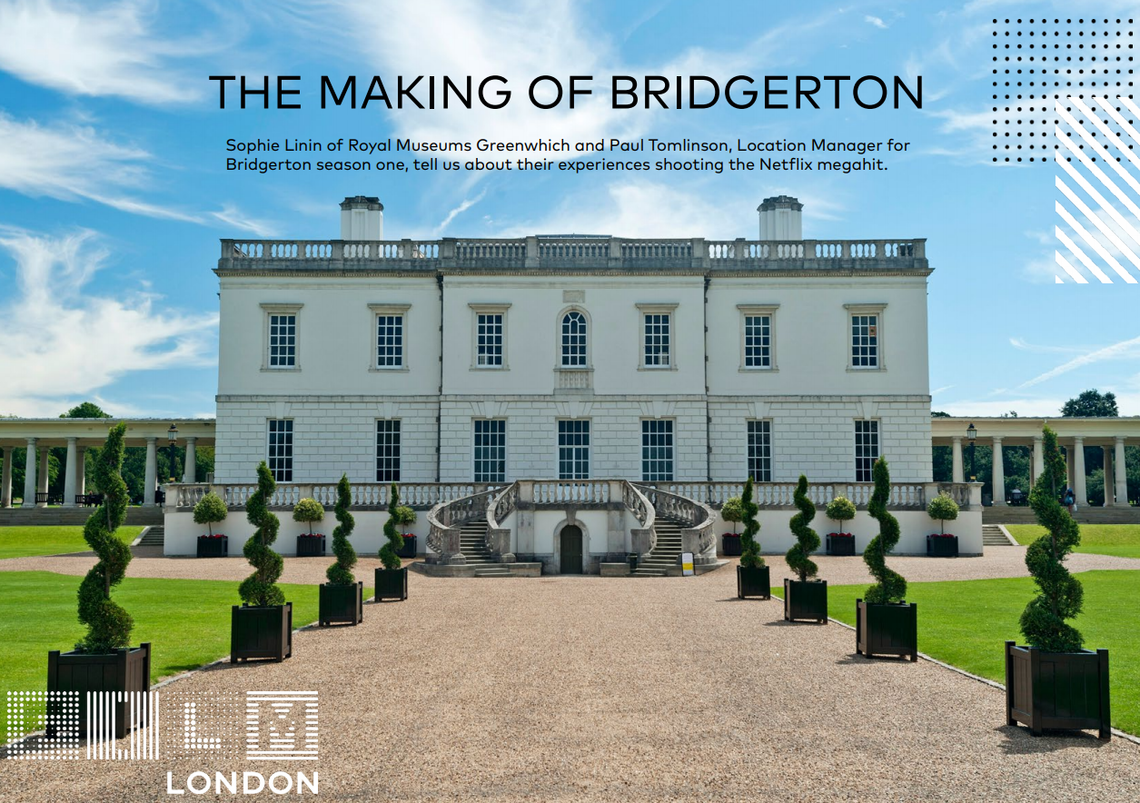 With Bridgerton Season two filming underway currently, we spoke to Sophie Linin, Senior Business Development Manager at Royal Museums Greenwich (one of our Premiere Locations) and Paul Tomlinson, Location Manager for Bridgerton about their shared experiences of shooting Bridgerton season one at Queen’s House.

Could you tell me about the specific scenes that were shot at Queen’s House? Are there are any key moments that audiences may recognise?

Sophie: “The front façade of the Queen’s House was used as the location of one of the balls, with Prince Friedrich being accosted by ladies as he got out of his carriage. The Carriageway underneath the Queen’s House was used for the argument scene between the Duke of Hastings and Lord Berbrooke, and then the Colonnades had a busy Mayfair Market set up which was used for the distribution of a Lady Whistledown pamphlet.”

Paul: “The front exterior of the Queen’s House also doubled for Somerset House in episode 3. The scenes were of particular importantance to the story, as it represents a key moment in the relationship between Daphne Bridgerton and the Duke of Hastings. We scouted lots of options for the exterior scene, but the Queen’s House always stood out; it felt like a great fit for the story and the expansive exterior gave us the option to fill the area with supporting actors, carriages and period dressing, which heled bring the space alive.”

Was Queen’s House transformed to look radically different or was it still easily recognisable when you watched the show?

Sophie: “It was easily recognisable, I think, because they used the Queen’s House frontispiece. We’ve had lots of comments from people who spotted us when they saw it. There was some dressing of the building but it onlyserved to enhance rather than mask the building. Flowers in vases here and there and of course horses and carriages everywhere! We were able to accommodate an 80ft x20ft green screen on the lawns at the front of the house as well to mask the modern City skyline and make it look like the house went straight down to the river.”

Paul: “Our exterior scenes featured wide shots of Queen’s House. We filmed an establishing shot with a drone which captured the building and its surroundings. The location is a great match for the period so did not need much adapting!

It took a day and a half to prepare the location for this scene and most of the dressing involved covering modern aspects of the building, adding period touches to the exterior including flowers and plinths, plus the construction of the green screen at the front of the building, for when we were filming reverse shots.

We filmed the Mayfair Market scene on a separate occasion and this took two days to prepare. There was a great deal of work required to create a bustling Mayfair Market, and this included creating several market stalls adorned with fruit, vegetables and colourful birds. Two large pink blossom trees were also brought in especially for this scene. Our preparations for filming took several months of hard work by the many departments involved in carrying out these tasks and were spearheaded by our Assistant Location Manager, Sammy Thomson, who worked tirelessly to make sure the creative and logistical plans for the location could be achieved.”

Sophie, now that Royal Museums Greenwich are reopening to the public, have you had any Bridgerton fans visiting the Queen’s House hoping to experience the Bridgerton world in person?

Sophie: “Whilst we’ve been closed for most of the last year and therefore haven’t been open to visitors, we have had people reaching out to us on social media because of Bridgerton, and having reopened on 17th May, we are starting to get asked about it more and more by our daytime visitors.” 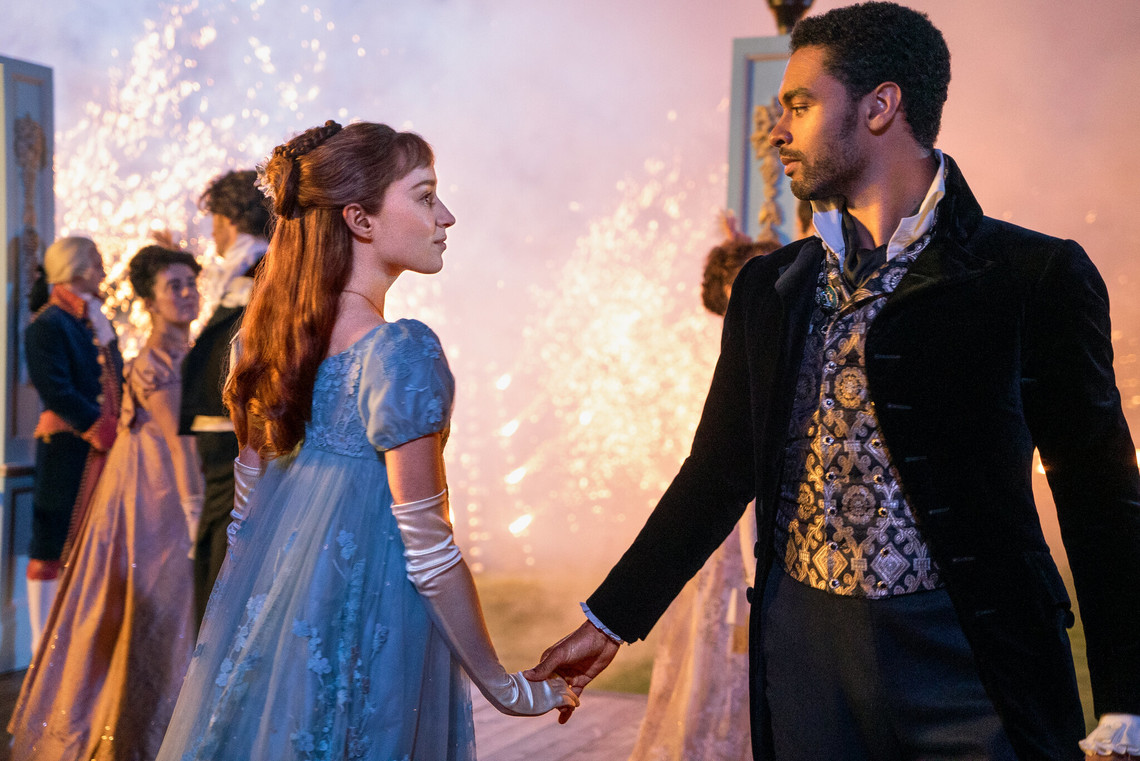 Paul, what made you choose Queen’s House for this part of the production?

Paul: “Queen’s House was considered from an early stage, and always felt like a good match for the period. Our focus was to find something that gave us a sense of grandness and space and the Queen’s House ticked a lot of these boxes and provided us with a fantastic canvas to create these scenes. During our first recce we stumbled on the covered archway between the colonnades (which was once the main Deptford Road that went through the middle of the house!). We immediately felt it was a perfect location and would work really well for the series. The two scenes we filmed in this area feel very different which highlights how flexible the space is.”

Sophie, what do you think makes Queen’s House such a great location for period pieces such as Bridgerton?

Sophie: “Queen’s House was the first classical building built in Britain and was designed by famed architect Inigo Jones so it has a definite architectural hook for period pieces, providing an excellent backdrop. It was built as a palace in the 17th century and is often used to represent royalty through the ages, whether in Bridgerton or The Crown. Having over 10,000 square metres of outdoor space surrounding the Queen’s House and the National Maritime Museum means we can accommodate large productions with ease.”

Paul, could you tell me a little about the location research and recceing process for Bridgerton? How many of your locations did you manage to find within London?

Paul: “Around one third of the locations in the series were based in London, as were our Production Offices and Studio. We were very lucky during the early stages of prep, as we travelled extensively throughout London and the UK looking for locations for the series. The story is set in London, so it was great we were able to find so many fantastic period locations in the city to create the opulent world our characters inhabited.” 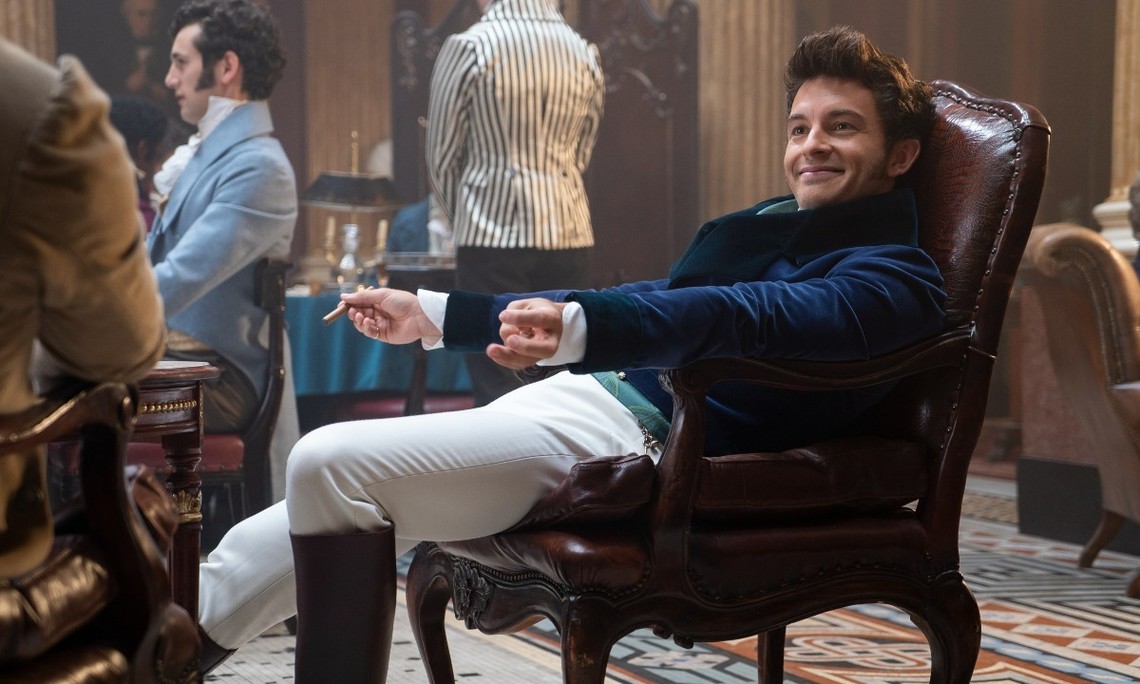 Sophie, how would you describe the overall filming experience with Bridgerton? Were there any particular challenges within the shoot, or any particular highlights for you and your team?

Sophie: “We loved working with the Netflix crew and it is wonderful being involved in such a cultural phenomenon. Of course, there were a few interesting requests that we had to problem-solve. The large green screen was placed on our north lawns which are protected under a Historic England scheduled agreement. We had to liaise throughout with Historic England to ensure we always complied with the agreement and worked with the crew to manage the weight of the telehandlers holding the screen.

In general, we do not allow animals onsite but for this one, we had to work with several horses who had their temporary stables set up in our staff car park! We even had budgies in the market scene and managing the safe care of the animals onsite was a big priority for us but of course the crew had it completely under control.

We also filmed using a drone which we had not done onsite before at that point and required a lot of eager planning and riskassessing to ensure the public were kept safe and it was all worth it, being ultimately the best shot! When that shot was featured in the trailer, and the Queen’s House looked so amazing, we were all very excited for the launch!”

Paul, how was the overall filming filming experience while at Queen’s House from your perspective?

Paul: “Our filming at Queen’s House was an absolute pleasure; we felt privileged to film our scenes in an environment that felt like such a perfect fit for the series. “One challenging aspect, as mentioned by Sophie, was our request to position a green screen and scissor lifts on the front lawn – this created concerns as Queen’s House is situated within a UNESCO World Heritage Site and in addition to the incredible listed buildings, there are also historical ruins in the grounds of the site, including under sections of the front lawn. Which is why the lawns are listed as a Scheduled Monument.

Due to the weight of the scissor lifts we wanted to put trackway on the lawn to protect the area, but these areas had to be checked and surveyed prior to installation, to make sure there was nothing sensitive underneath.

Thankfully we were able to establish the areas to avoid and position our green screen and trackway safely. We encountered a very different challenge during our second visit, as it was due to clash with the installation of a Christmas ice rink that is set up annually within the grounds of Queen’s House. After many discussions it became clear the installation could not be delayed, but thankfully we managed to avoid the ice rink in the background of our Mayfair Market scenes, and the installation team were kind enough to work around our filming to avoid noise disturbance – the footage looks like a bright summers day, whereas in reality it was late November and just a few metres away a giant ice rink was being created!”

Thanks so much to Sophie and Paul, for sharing their time and behind the scenes secrets with us. We can’t wait to see what Bridgerton season two brings!