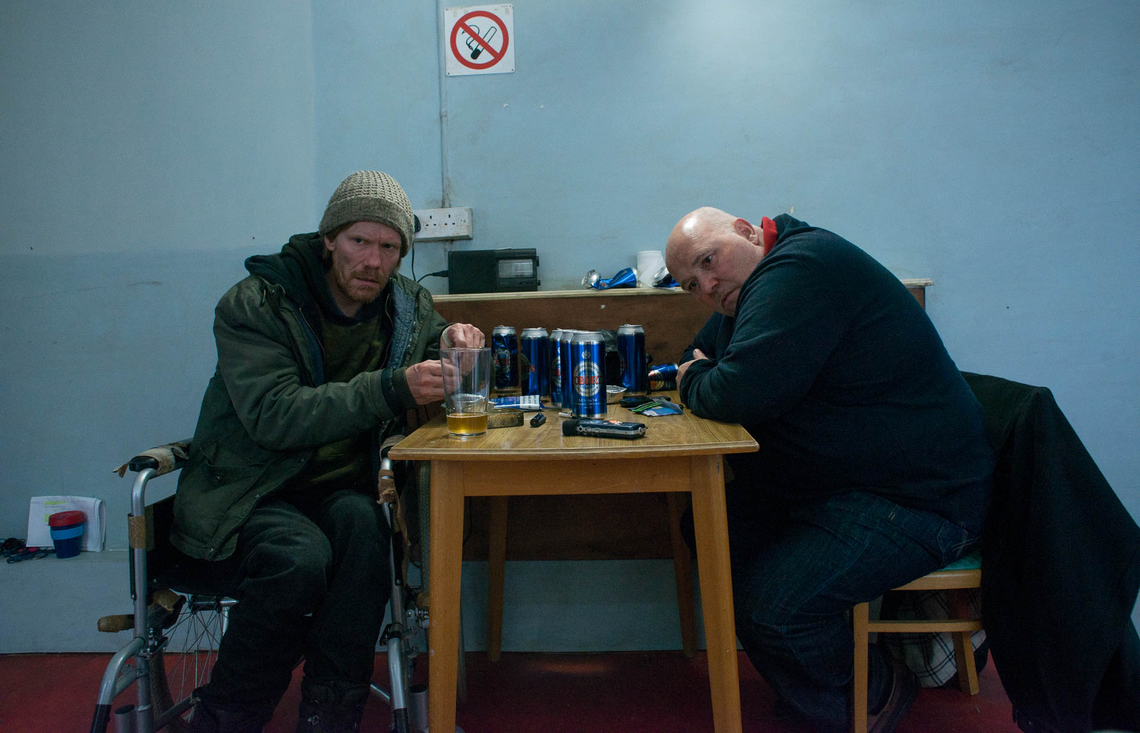 The Waiting for God Team were awarded by the BFI NETWORK Short Film Fund in 2018.

Film London interviewed the team — writer/director Alecky Blythe known for her verbatim technique which she transfers to film and producer Andy Brunskill about their creative process.

What was your journey into the film industry like?

Alecky Blythe (Writer/Director): I had already had some experience from adapting my stage play London Road for film, although for that project I was not directing. It’s quite a different experience when the final decisions fall to you. For Waiting for God, I was really fortunate to have a wonderful team around me on whose superior film knowledge and expertise I could rely on.

Andy Brunskill (Producer): It was a while back now, so things were a bit different. Actually, my first bit of work experience I got was because I was being medically tested on for some cash and another guy there was reading a script and we got to talking. That led to an unpaid in-house runner job, which led to more of the same, until I’d done work experience gigs in about 8 prodcos. Then I got a paid maternity cover job at a company called DNA before landing the job as Producer Alison Owen’s assistant, which I did for five years. That was fantastic and all I needed to learn the ropes and start having a crack on my own.

Tell us about your BFI NETWORK-supported Film.

Alecky Blythe: I spent a month with two rough sleepers, Raymond and Keith, capturing their life on my dictaphone. The script is created from an extensive edit of that material. I was carrying out my research at a crucial time in Raymond’s life, when his dreams of getting a flat after years of being on the streets, were on the cusp of becoming a reality.

Tell us about your experience with the BFI NETWORK Short Film Team. What did you learn?

Alecky Blythe: I learnt that economy and clarity on the page is key.

Andy Brunskill: Great experience. Enjoyed the presentation readthrough day and everything we got from that. The script moved on a fair bit because of it. And then their notes on the edit were fantastic every time - they definitely squeezed an extra 20% into the creative during that process

What was your creative process, how did you get ready to make the film?

Alecky Blythe: Largely my process was similar to the way that I usually work, involving audio interviews with real life characters, which then become the script. However, the edit was far bolder than I do for stage. I had to refine the script more extensively and “push” the truth further in order to make the necessary narrative impact in such a short period of time.

Andy Brunskill: It was the first time we’d worked with verbatim, so the big question was how to build the drama and stay true to Raymond and Keith, their stories and the original audio? We worked out bookending devices to add more tension and stakes to the script while still allowing it to be authentic. It was selecting which bits of information to tease in when. It was really delicate and continued all the way through the post as well.

WAITING FOR GOD seems to cover very human experiences of homeless between two friends. Where did these inspirations come from? What particular areas of the project brought you all on to create the film?

Alecky Blythe: The inspirations came from real life; they are not made up. We had a shared interest in representing the homeless without judgement, through their eyes and lived experience.

Andy Brunskill: Alecky brought us the project having already recorded all the material and done a fair bit of arranging into a script. What really hit us was the ending and the huge rug-pull into reality.

Alecky Blythe: They are important because their stories are largely untold and easily stereotyped. In our busy everyday lives, very few of us take the time to listen to their stories of how they ended up on the streets, we would sooner scurry past and not have to deal with them.

Andy Brunskill: As Alecky said, amazing to be able to give these two guys their own voice. A chance to tell their own story. It’s interesting, we’ve partnered with two charities for the release of it – The Barons Court Project and Shelter from the Storm – and Shelter from the Storm particularly said that they wouldn’t normally do this, but because it’s the guys themselves telling it, it feels right. Sadly, both Raymond and Keith have passed away so it feels great they can live on in this way, contribute to helping raise awareness, and in so doing potentially help others. And the world gets to hear them joking with each other, which is the bloody best. 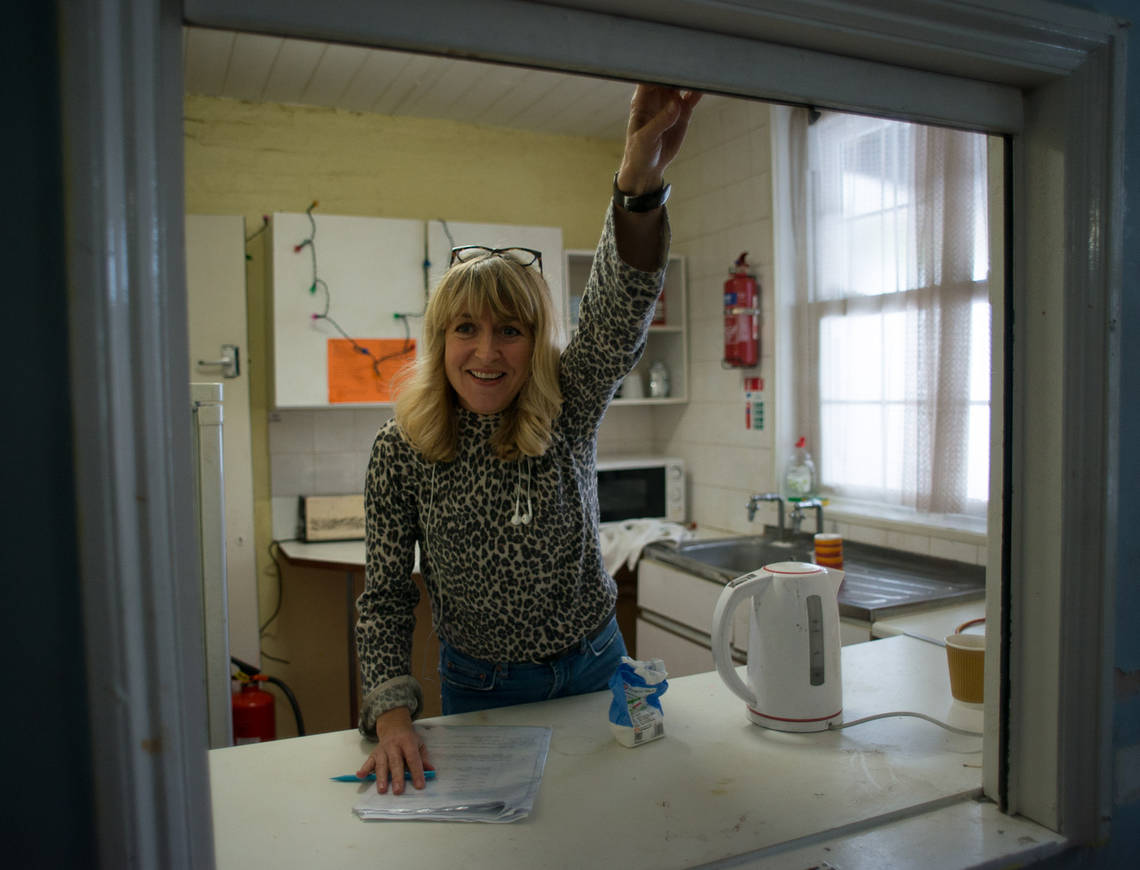 What are you hoping for audiences to get out of this film?

Alecky Blythe: I hope people see past the stereotype and have a clearer sense of the human story/ tragedy that we walk past on a daily basis.

Andy Brunskill: It always feels like an experience in form to me. The audience works out not only what’s going on but what’s real and what’s created/staged. That interplay feels like it should be a novel, interesting and enjoyable experience until the two sides dovetail at the end so drastically and shockingly. Then the ending might hopefully help defamiliarize a bit, into consideration and action.

Can you talk us through one of the scenes/Do you have any favourite moments from the shoot or process?

Alecky Blythe: There are certain scenes that still make me chuckle even though I’ve seen them a hundred times by now. It’s not a big moment but I love the short scene between Raymond and the vicar when he goes to get some money for his electric key. I was so pleased that the complicity with the viewer works so well. The way both the actors play it, you get a real sense of the different relationship each character has to the camera; Raymond complicit letting the viewer in on his scam and the vicar a little confused and desperate to do the right thing in front of the viewer.

Andy Brunskill: It was time-consuming as we kept having to screen it for different sets of fresh eyes, but I enjoyed the last stages of post. We kept having to adjust the amount of information we gave out in the first minute or so to test the reactions. The detail about what the artificial construct was for the film – how much to label it and how many clues to give. Seeing small changes makes such a big difference, was fascinating.

What was the most challenging scene to shoot, can you walk us through how you overcame that?

Alecky Blythe: Undoubtedly the hardest scene was the opening and closing scene when Raymond is lying on the ground and commuters walk past. It took a very long time to find the right location, not having the budget for the sort of shot we envisioned, which would have required a crane. Therefore, we had to get creative. This involved a long steadicam shot that was incredibly difficult to shoot due to the weight of the camera and the need to keep the lens as still as possible.

Andy Brunskill: As above. Not to mention we had permission to shoot just by Trafalgar Square, but not in it, and of course the best shot that everyone wanted was just slightly in it. So, much sweet talking, persuading and eventually fending off of the authorities was required. And as always it was the last take that we ended up using. Poor Nick Holder of course laid on the stone floor in the cold and wet the entire time.

What was one lesson you would say you learnt on this particular project?

Alecky Blythe: To choose your battles and then fight hard for them.

Andy Brunskil: I knew it already but women are the best! 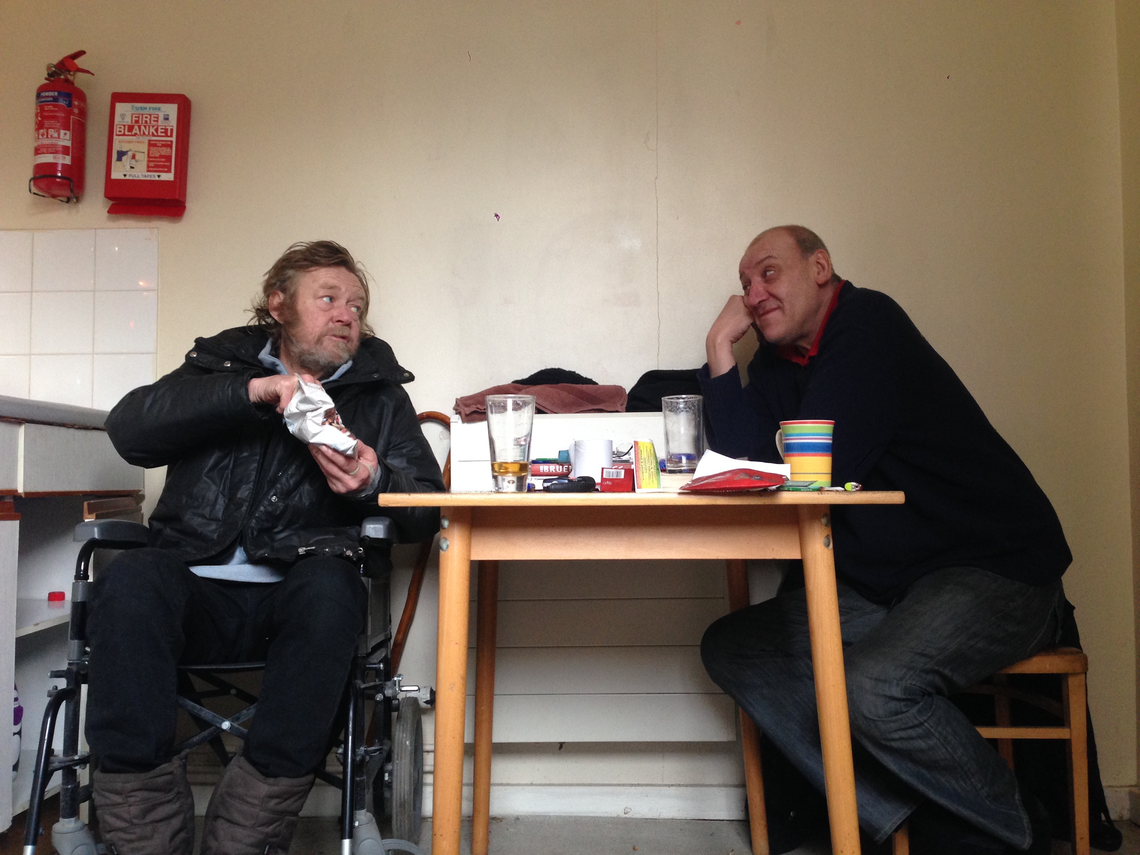 What advice would you give to other filmmakers embarking on making their film right now?

Alecky Blythe: Don’t be disheartened by having to do endless rewrites, it’s par for the course.

Andy Brunskil: Before you chuck proper money at a short, maybe do 3 shorts on your phones before, that cost no money and that nobody needs to see. Once you finally spend money on a short, that’s your first place in the eyes of the industry, so get it right. Then you can be the hot new thing that nailed their first short, so people HAVE to fund your second, bigger short, and you’re well on your way.

How are you navigating the COVID-19 situation and keeping engaged and balanced?

Alecky Blythe: I fortunately have writing work to keep me busy and a puppy to keep me on my toes, so I am really not doing too badly.

Andy Brunskill: I’m realising how great working from home was as a thing to do sometimes. As it’s now always you have to make yourself go out in the world and stop working sometimes, in order for the work to be good. And then variety. Do the big late-night shift sometimes, and then have half a day off another day.

What happened after you made the film – what kind of response did you get from the film festival scene and industry?

Alecky Blythe: It’s not gone to festivals yet, but we had a fabulous response from the cast and crew screening so I’m excited to get it out into the public.

What’s next for you?

Alecky Blythe: A new play for the National Theatre, another for the Royal Court and I’m really pleased to say that I’m working on a feature film with Andy and the BFI.

Andy Brunskill: Awaiting green light on a TV show, a new-format show and casting/financing some features.

If you’d like to make a short film, we can help! Find out more about the BFI NETWORK Short Film Fund.

Want to find out more about our events programme for emerging filmmakers in London? Follow us on Twitter.