When I started to think of 5 films to recommend that absolutely encapsulate the spirit of Christmas, I ended up fastening on to the work of Charles Dickens, and his most famous Christmas story, A Christmas Carol.

Dickens is uniquely associated with London. So many of his stories - and the movies, television and theatre they became - are set in London, and A Christmas Carol is no different. It's also, in many ways, the story that invented our notions of a modern, urban Christmas in London, full of contemporary concerns about poverty, society, and the class system - but also about reconciliation, forgiveness and charity.

Dickens wrote A Christmas Carol in 1843, and it has resonated through the years, acquiring an almost mythical status and becoming probably the most adapted Christmas story of all time. Dickens actually wrote four other Christmas books, and dozens of stories, but none had the meaning of this one. It's an incredibly important part of our contemporary mythology about what the festive season means, and it's no surprise that filmmakers have turned to this source material again, again and again.

This fantastic story still has lessons for us - moral, but also about sympathy and true emotional heart. It still carries as important a message as it did when Dickens wrote it in 1843.

Have a fantastic, festive - and a little bit Dickens - Christmas season!

Chief Executive of Film London and the British Film Commission

It's amazing that, nearly 70 years after release, Scrooge is probably still the most famous, familiar adaption of A Christmas Carol - and it was shot right here, on the streets of London, in and around The Royal Exchange. It's one of those films we associate with every Christmas season. It might be black and white, it might have been made a long time ago, but it still has the power to make us laugh, to touch us - and that's because of the sheer quality of the filmmaking.

Director Brian Desmond Hurst brought real verve and energy to this adaptation, and he's immeasurably aided by an outstanding performance by the great Alastair Sim, one of our most brilliant comedic actors. Sim's career went from strength to strength after this - from St. Trinian's and School for Scoundrels to An Inspector Calls - and he was one of the great, great actors of his time. This role is indelibly associated with him. 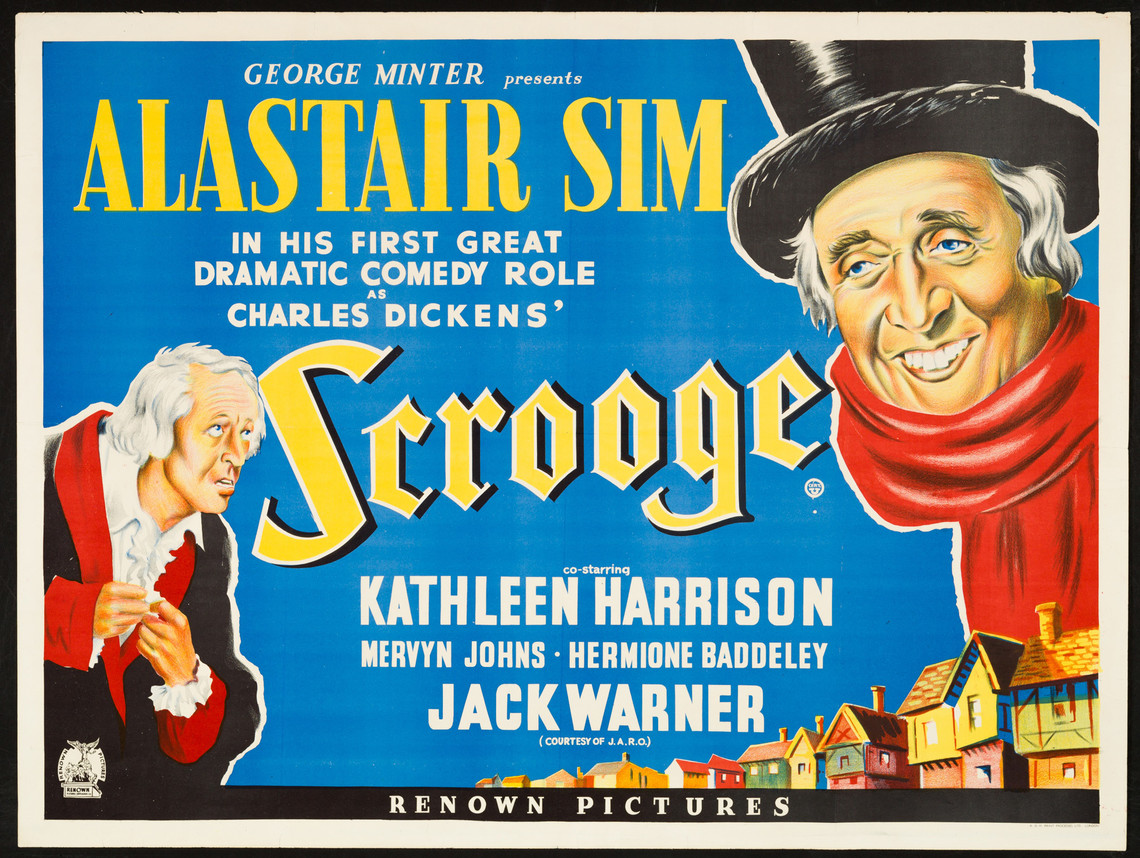 Sim, in turn, is aided by a frankly brilliant script adaptation by Noel Langley, a South African writer who had a long career in British and American cinema. In fact, his other great claim to fame is that he was one of the screenwriters of The Wizard of Oz.

After all these years, this film still has the power to enchant - it's still really funny, it's still really touching. It doesn't creek - it is beautifully made. It's emotive and wonderful cinema. If you have seen it before - watch it again. If you haven't, I really envy you! Revel in this fantastic version of A Christmas Carol - it might not be the first, but it may be the best.

The Muppet Christmas Carol is an absolute Christmas classic. The film was made just after Jim Henson, creator of the Muppets, passed away, and was directed by his son Brian, so it came at a really important time. The Muppets were a global phenomenon by this stage, but their success in many ways was down to the UK, to London. The original television series, which ran from 1976 to 1981, was turned down by all the American networks, and it was down to Lew Grade and ITV that the Muppets had the career we all associate with them.

For those of us growing up in that era, Sunday evenings with The Muppet Show were an absolute must, filled with incredible jokes, wonderful puppetry and fantastic guest stars. It wasn't a surprise to see them expand from that base at Elstree Studios and make the move onto the big screen with a series of movies - but this was the first time they'd really fastened on to this kind of source material. Henson Muppet-ised a classic novel, taking the world of A Christmas Carol and immersing it in the world of The Muppets - it shouldn't work, but it's a brilliant combination. Kermit, Gonzo and Miss Piggy are there, but in the world of Dickens - and, of course, there's a truly brilliant guest star in Michael Caine, as Scrooge. 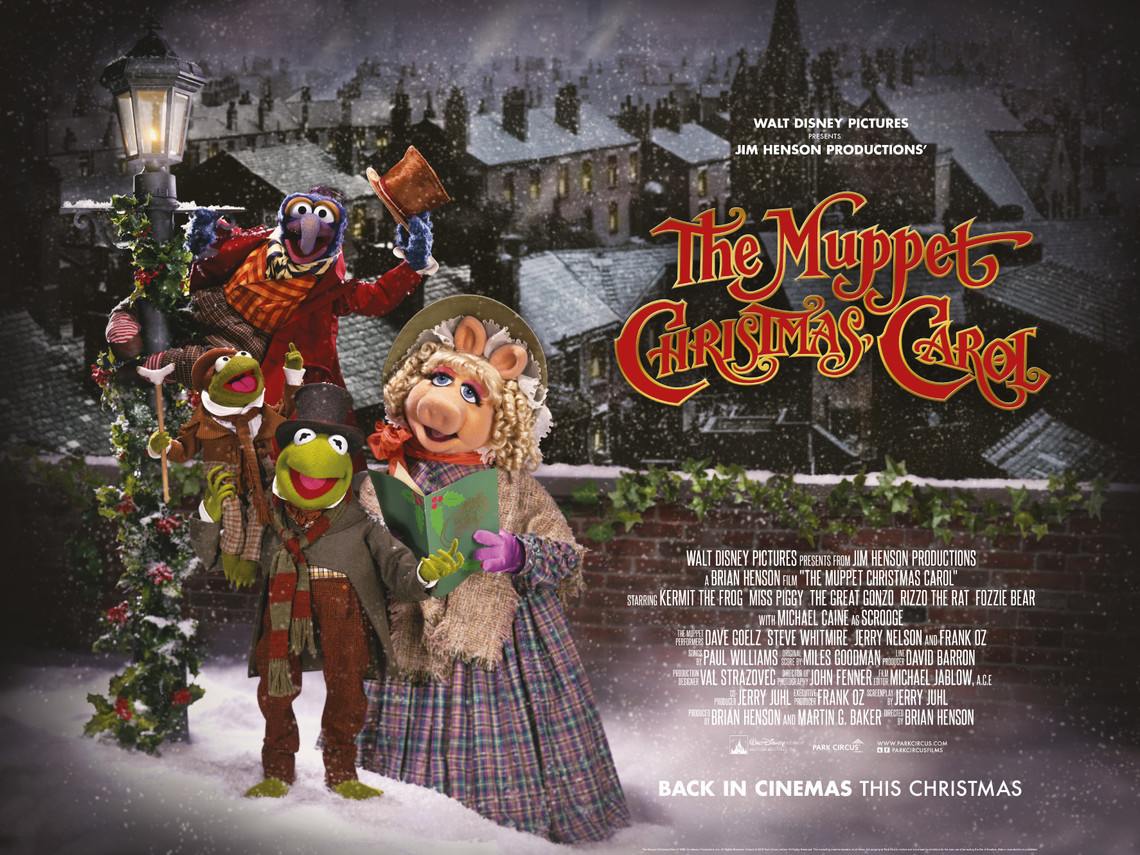 It's a musical - there are songs, dance - as well as ghosts, crazy Muppet comedy - it's deliriously wonderful. It cemented the Muppets success as big screen stars, and ensured their legacy. It's probably the best Muppet movie - it has that extra grain of masterful storytelling underlying the comic sensibilities. The combination is fantastic.

An extraordinary animated version of A Christmas Carol, directed by the amazing American filmmaker Robert Zemeckis. Zemeckis is very well known for his Hollywood blockbusters - from Back to the Future to Forrest Gump - but he's also a real innovator when it comes to new technology. He started looking at animation and motion capture in 2004's Polar Express, starring the voice of Tom Hanks, a Zemeckis regular, and took it to another level with this 2009 adaptation of A Christmas Carol.

Zemeckis secured the not inconsiderable services of the wildly talented Jim Carrey, not only to embody Scrooge, but also to play all the ghosts of A Christmas Carol. The film may have been made in the United States, in California, but it did something extraordinary - it mapped an animated, motion capture version of London from 1843, reinstating architectural landmarks that have long since gone, so it was as close as possible to the landscape in which Dickens wrote the novel. 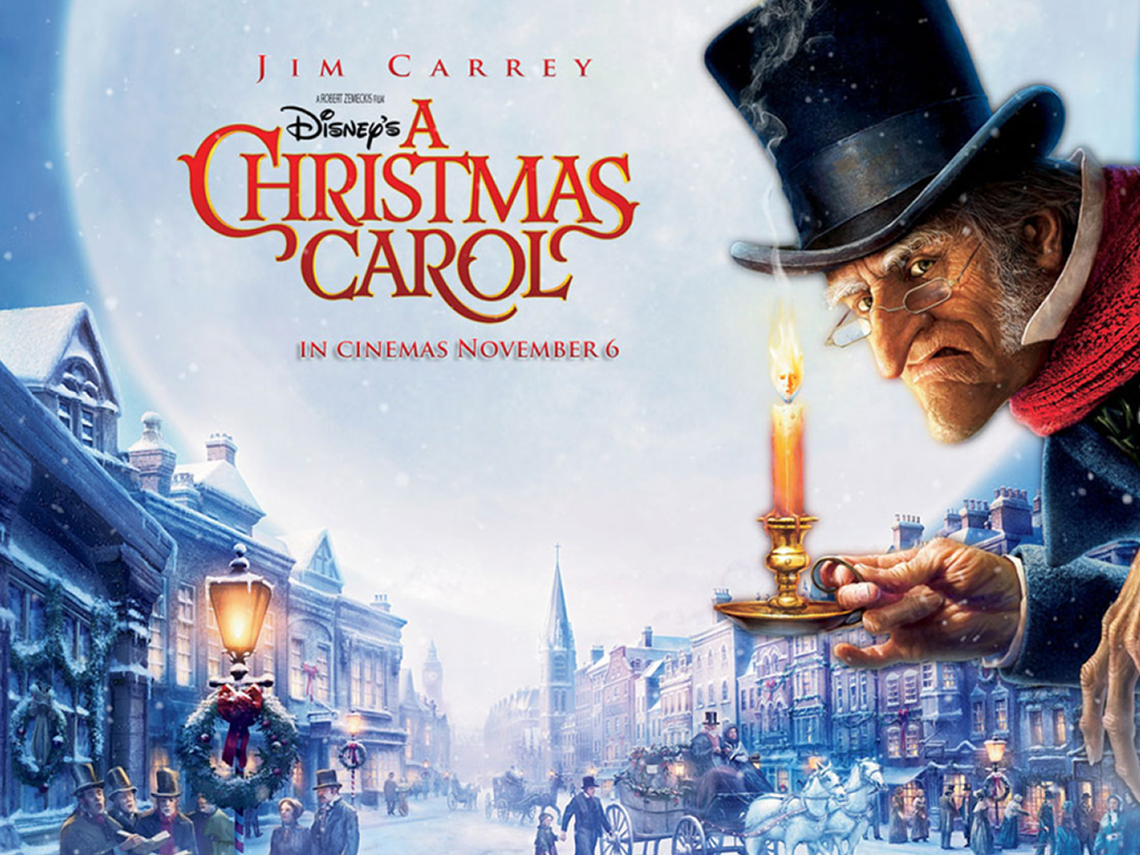 Jim Carrey's performance is astonishing. It's incredibly bold and ambitious, but it also channels, as Carrey himself admits, Alastair Sim's Scrooge from the 1951 Brian Desmond Hurst classic. While this A Christmas Carol is incredibly forward-looking, with modern technology bringing elements to the story that weren't possible before, Zemeckis and Carrey are careful to be faithful to the traditions established in earlier great adaptations of Dickens' Christmas classic.

I had the pleasure of attending the world premiere of A Christmas Carol at the Odeon Leicester Square - it really had to premiere in London - with Zemeckis and Carrey on hand to present the film. As a Dickens aficionado, I was bowled over by the ambition of this movie. It went on to be a huge success, and was the first movie of its kind, released in IMAX HD.

I really believe it bears admiration and rewatching. It's one of the most distinctive and original attempts to film Dickens in animation. It's really quite special. It's innovative, unusual and ambitious, and it's really worth a look during this festive season.

An adaptation for the small screen, this version of A Christmas Carol is directed by Nick Murphy, and adapted by the somewhat legendary Steven Knight, creator and writer of Peaky Blinders amongst many others. Steven took a radical approach to this multi-part television series, aired over Christmas 2019 - he wanted something darker, more contemporary, even though it's still a period drama. He wanted something bleaker, bitter, and with a real edge. My goodness, he delivers. It doesn't necessarily have the Christmas spirit of some of the more traditional adaptations, and focuses on the dark, the unforgiving, the unreconciled, in order to bring us to that place of forgiveness and reconciliation we associate with A Christmas Carol.

It's a brave, impressive adaptation, due in no small part to the remarkable Guy Pearce. He gives us an incredibly powerful performance, a younger kind of performance, as Scrooge. 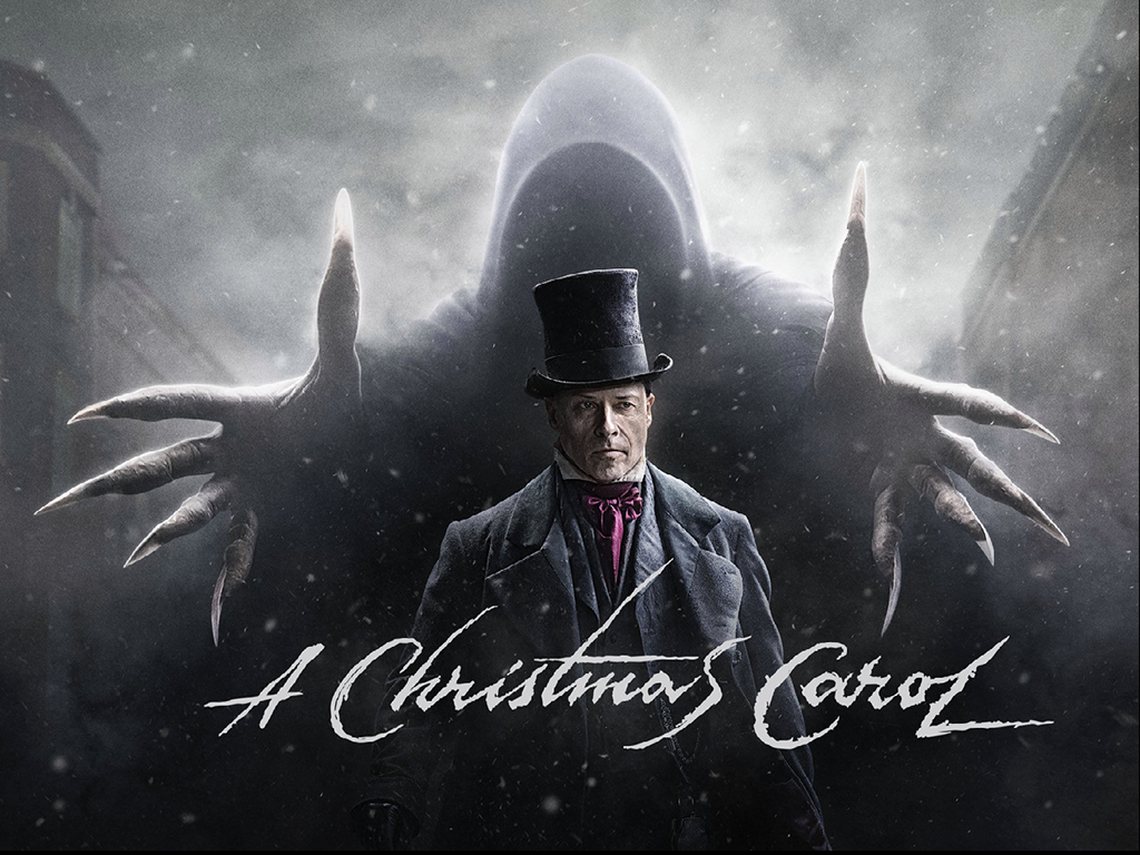 There are some wonderful VFX, and the embodiment of the ghosts is delivered by no less than resident London genius Andy Serkis, who of course graced the Lord of the Rings trilogy, and the King Kong movies, and plays rather brilliantly off Pearce's wonderful portrayal of Scrooge.

This adaptation is really worth seeking out and watching again. I don't think it necessarily got the credit it deserved when it came out last year, and, a year on, it's worth reconsidering, especially in the context of the other movies I'm recommending. So please do watch Nick Murphy and Steven Knight's rather special version of A Christmas Carol.

It's extraordinary just how many brilliant adaptations of A Christmas Carol there are, and how that story still touches us, makes us care about Ebenezer Scrooge, his life and the change he undergoes. Filmmakers can strive to do such different things to the story, whilst staying very much within the world of Dickens - and that's just what Jacqui and David Morris, the writer/director team, have done with this brand new adaption.

Jacqui and David Morris are noted filmmakers, known primarily for documentaries like McCullin and Nureyev, and here they've pulled together their documentary skills and their knowledge of dance for a radical, reinvented version of A Christmas Carol, one which remains true to Dickens' story, but is doing something incredibly fresh. The film features an incredibly clever, imaginative reframing of the story, reinventing the eyes through which we watch the story unfold. 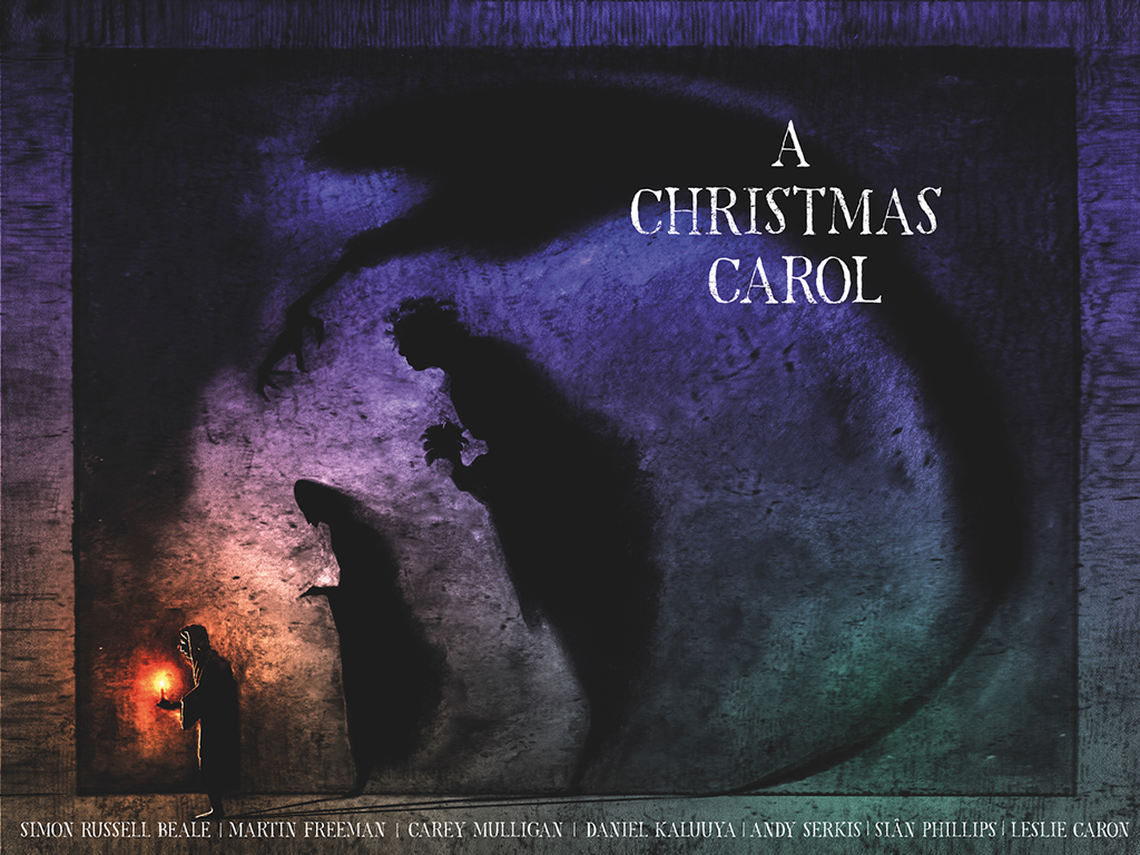 The film has a brilliant voice cast, featuring Carey Mulligan, Martin Freeman, and Simon Russell Beale as Scrooge. It also has Andy Serkis, back again in another version of A Christmas Carol, contributing the voice to a magical, dancing, VFX-enhanced Marley. The combination of all of these elements makes for something very, very fresh, and a fascinating retelling of the classic tale for modern audiences.

The fact that it's made for cinema is really exciting, and important - we need to support cinemas at this time, and what better way to do it than to go out and watch a new version of Dickens' Christmas classic reimagined for you, a modern audience.

I heartily encourage you to seek out Jacqui and David Morris's wonderful new version of A Christmas Carol. See it in the cinema if you can, support the cinema. Support the filmmakers - they deserve it. How wonderful it is to be able to celebrate this festive season with a new version Dickens' classic in cinemas.