Adonia Bouchehri is one of six artist filmmakers who have been on The FLAMIN Fellowship in 2020-2021, FLAMIN's year-long programme offering development funding, mentoring and support to early-career moving image artists. Her work explores the relationship between image and touch and the tension between the familiar and the foreign. She works with video and CGI to create environments that can traverse geographical locations, opening up new ways of inhabiting spaces. Her work has recently been shown at the BFI London Film Festival; Scottish Royal Academy, Edinburgh and New Art Exchange, Nottingham.

We spoke to Adonia about her work in CGI animation, how images effect our bodies, cross-generational memories of the Iranian Revolution and her experiences of being part of The FLAMIN Fellowship.

FLAMIN in conversation with Adonia Bouchehri

FLAMIN: Could you tell us about your artistic practice?

Adonia Bouchehri: I work across a range of different media. The final outcome usually is a single channel video, but there's a lot going into it and the process. I work with CGI animation, and writing always plays an important role, as well as live action footage. I'm weaving together these elements to create the work.

I'm always really concerned with thinking about the kind of images we live by and we grow up with - how they affect us and our lives and our perception. And I often think about images as coming to inhabit the body and having a really strong physical effect on the body, and that is always something that really interests me. So that's also how I often start, I start with an image or a few images that have this really strong physical effect on my own body, and I start to ask questions about these images. Why do they have this effect? Does it have something to do with me, or could that also be related to larger societal questions? And that's kind of the starting point to investigate an image or number of images and think about the properties of that. And then really go into this research phase. Now, what does it signify? What does it point to? What does it mean for the place I live in? That's always for me a really interesting point of departure.

What was the project that you applied to The FLAMIN Fellowship with?

The project I'm working on with FLAMIN is based on the memories of my mother, who is from Iran, and she lived there until the age of 15. As a result of when the Iranian revolution happened in the late 1970's, she and her family had to flee. I grew up with those stories that she used to tell. They are really close to me, although it's something that I haven't experienced myself, and they've affected my imagination quite strongly. And that is something I'm extremely interested in, in these moments that feel very close and at the same time they feel foreign because I haven't been to Iran myself. So I'm trying to investigate these moments, this layering of memories and imaginations. The aim for the film really is to take all this into account and work with these rememberings and mis-rememberings. I want to explore the gaps between that and really dive into these different layers of lived experience.

What audience do you hope to reach with the work?

With this particular project, I would like to show it in a gallery context, even though it's going to be a single channel video, because this work happens to produce so much alongside it. So I'm making two tapestries, and these and other sculptural objects will feature in the film and exist in their own right as well.

What has it meant to you to be developing your project with the FLAMIN team?

I think that development is so important and really shouldn't be underestimated. For me, it always has been really important. I usually work on a project for quite a long time, usually around a year. And I do that by myself usually. But having support with that development and even feeling like your project is already part of the world is a very different feeling. Because sometimes when you're just working on something by yourself, it's not part of the world, because it could just be like a phantom in your mind really. But as soon as you talk to start talking to other people and have conversations with other people who are working in similar ways or in a similar field, it gets more of a physical body or it becomes more real in a sense. And I think that is so important, really. So I think development programmes in general are really great for artists and filmmakers and I think there should be more of them.

Do you have any top tips for people applying to The FLAMIN Fellowship?

For people who are looking to apply to the FLAMIN Fellowship, I would say to try to really put forward a project that really, really matters to you - whether it's something you've thought about recently or a long time ago, that doesn't matter really - it's about something that is very important, and that you feel strongly about in some sense. And then try to really give the application some time. That's what I did. People work in different ways, but I think I really approached it in a way that I just started taking notes, and started to think about what do I want from this project? Why do I want this project to be developed as part of this programme? And because I gave it time, and I worked over on it over an entire month, it just came together and made sense to me. I think that's really important - how does it make sense to you and your mind? Because that might be very different from how you can communicate it on paper, and to really work through these ideas. If you're feeling really strong about something, I think that comes across, and I think that's probably when someone reads your application, they are looking for that - something that grips you. It doesn't have to be a big idea, it could be a small thing, but just something has to spark from the project. I guess that's what I would say.

What was the interview like? How did you prepare?

When I was interviewed for the place, I went back to the application I'd written initially, and really went through it and tried to think about the most important points within that application - what were the pillars of that? What was it that I really wanted? What was I not able to communicate in a written format? Because, of course, FLAMIN had read the application already - is there is something that you can communicate in meeting someone, even if it's on zoom, that cannot be said in the application? I think, try to think about that - what is it that has been left out because it cannot be communicated in writing? And then I just took down some points, I was writing things down that helped me to clarify things. So I wrote down some key words or things that mattered most to me. And then in the interview I took it quite spontaneously, I didn't have any notes or anything. I think if you know the project well, if you have really invested in the project, then that will come across in the interview.

What are your hopes and ambitions for the future?

I hope that I can just continue on my path making work and I hope I can continue making films and to develop this. Over the last few years I've developed a certain way of working and it's grown a lot, even over the last year being part of the FLAMIN Fellowship. I would just like to continue that, develop that further, I would like to work more in a gallery and museum context. I often feel like my approach is so much informed a visual arts background and I happen to work with the medium of video because that makes sense to my way of thinking - because it's very much about the layering of different lived experience. For me, it's really about bringing together this idea of more ordinary lived experience, memory and imagined spaces. That's something I'd like to take further, and its something that also plays into this project of course - this idea of memory having something to do with forgetting and constructing something - we're always constructing our memories. You might completely construct a memory that has never happened, or you might change a memory. That is very much how I think about making a film as well, its a combination of constructing and reconstructing something. That for me is a very rich way of working, and is something I'd like to take further. And that's something that feeds into this idea of having the physical objects in a space with the film, and the communication between the two.

Find out more about FLAMIN's year-long artist development programme which Adonia participated in, in 2020-2021 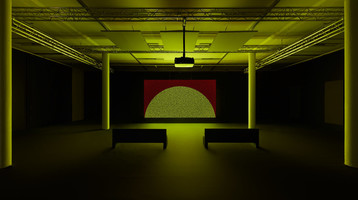