FLAMIN Productions supports mid-career, London-based artists whose ambitious projects have the potential for national and international exhibition and distribution, and Film London is pleased to announce this year's recipients; Suki Chan, Steven Eastwood and Patrick Goddard. Once the development stage of each project is successfully completed, the artists will receive production funding of up to £30,000 each, as well as ongoing support and mentoring opportunities tailored to the artist.

Adrian Wootton, Chief Executive of Film London and the British Film Commission, said: “The FLAMIN Productions Development awards support artists to pursue their next artistic leap with work that signifies a pivotal progression in their career, and this year is no exception. Globally we are of course operating in unprecedented times and the impact of COVID-19 will undoubtedly be felt deeply by artists and screen industries as we work through this ever evolving situation. But today's announcement highlights our commitment to build on the UK's rich history of nurturing talent and supporting world class artworks and we are delighted to support Suki Chan, Steven Eastwood and Patrick Goddard in this way."

The selected artist filmmakers are set to embark on a range of projects over the coming months. Whilst all physical production is currently on hold, and the awarded artists are observing government guidelines on social distancing, they are moving the projects forward with research, conversations, writing and planning, in anticipation of production getting underway as soon as it is safe to do so.

Suki Chan’s work Fog in My Head is an immersive and intimate journey into the personal experiences of author and activist Wendy Mitchell as she navigates the fog of her dementia. Conceived through a collaborative process with Mitchell, the film interweaves her autobiographical accounts with abstract dramatisations and creative re-imaginings of moments in her life.

This piece sits within Chan’s wider project CONSCIOUS, a long form research, exhibition and film project, which Chan is developing across multiple platforms.

Steven Eastwood’s Stim Cinema (working title) uses a participatory method to explore how neurodiverse perspectives have the potential to transform the moving image. The work considers the cinema as a space bound by assumed neurotypical orthodoxies of human behaviour and interaction. A series of environments is established. Eyelines don’t always match and the faces of subjects, along with the people they encounter, gradually cease to be the centre of the cinematic arrangement. Instead, backgrounds, objects and dynamic relations between things start to take the starring role.

The artwork is a part of Eastwood’s Autism through Cinema project, which also includes a feature documentary and VR piece.

Patrick Goddard’s Animal Antics is set in a zoo and follows a conversation between a man and a talking dog called Whoopsie. Visually rich yet melancholic images of the zoo’s inhabitants, combined with the pair’s increasingly surreal observations, will result in a film that sits somewhere between an absurdist comedy and a brooding reflection on man’s relation to animals and the non-human.

Patrick Goddard's Animal Antics is a co-commission with Film and Video Umbrella and Hayward Touring. 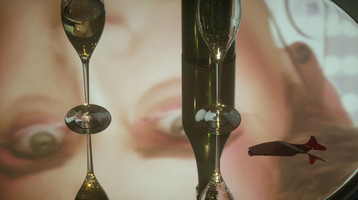