The two London-based artists selected for FLAMIN Productions Round 8 were: Roz Mortimer and Paul Simon Richards.

The Deathless Woman is a ghost story for the 21st Century.

This urgent and magical hybrid documentary fluidly interweaves fantastical re-imaginings of buried secrets with a ghostly narration and direct to camera testimony from survivors and witnesses of historic and contemporary crimes against the Roma in Poland and Hungary.

A Roma woman buried alive in a forest in Poland during WWII returns to haunt us, uncovering a history of atrocities against the Roma in Europe. She is the Deathless Woman. Motivated by rage, she rises from her grave to draw our attention to the persecution of the Roma people from the 1940s to the neo-Nazi hate crimes of the present day.

‘A powerful and poetic account of WWII Roma genocide and its contemporary resurrection. Hugely successful on both an artistic and a political level, it is a remarkable piece of work’ Trisha Tuttle (BFI London Film Festival Director)

Roz Mortimer lives and works in London. Since 1995, she has been producing both short and long form experimental films, which have been screened nationally and internationally at film festivals, galleries and cinemas, online and on television. Mortimer’s work is focused on expanded and experimental forms of documentary across a range of media, from film and video to photography, sound installation and performance.

Mortimer has an MA in Visual Sociology from Goldsmiths, University of London. She is a researcher in the School of Media Art and Design at University of Westminster and lectures in film at art schools and universities in the UK and USA. Her work has been supported by Arts Council England, Wellcome Trust, Rockefeller Foundation, British Council, Film London, LFDA, LAFVA, Animate, Eastern Arts and Channel 4.

Quasi-Monte Carlo is an ambitious video work exploring patterns of randomisation and their role in the production of an image.

The work combines computer generated imagery and spoken word monologue in an attempt to depict an image of a dream holiday to Monte Carlo. Memories, fantasies, paranoia and desires cohere in a kaleidoscopic narrative that oscillates between the mundane and the spectacular.

Quasi-Monte Carlo is part of an ongoing body of video works dating back to 2016. The series takes its title from the name of the algorithm that Richards has used to produce the CGI footage that appears in different forms throughout these works. The equation that underpins this algorithm was originally devised during the late 19th century in and around the Monte Carlo Casino, where the work was filmed. Combining this formula with techniques borrowed from hypnotic induction and structural film, Quasi-Monte Carlo seeks to draw a link between the creation of an image in our minds – which involves the rapid processing of random information – and the creation of digital images, relating human error to questions of probability and random access.

The work includes performances by actress and Richards’ long-term collaborator, Jacky Bahbout. Costumes are designed by artist Claire Hooper and the score is produced by experimental musician Kenichi Iwasa.

Paul Simon Richards lives and works in London. He studied Fine Art at the Slade and Philosophy at Greenwich University. In 2011 Richards was a LUX associate artist. He is currently a lecturer of Fine Art at Central St Martins, and is represented by Arcade. 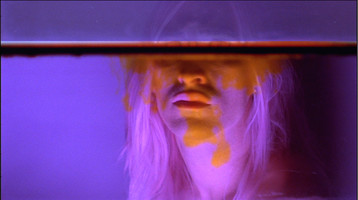