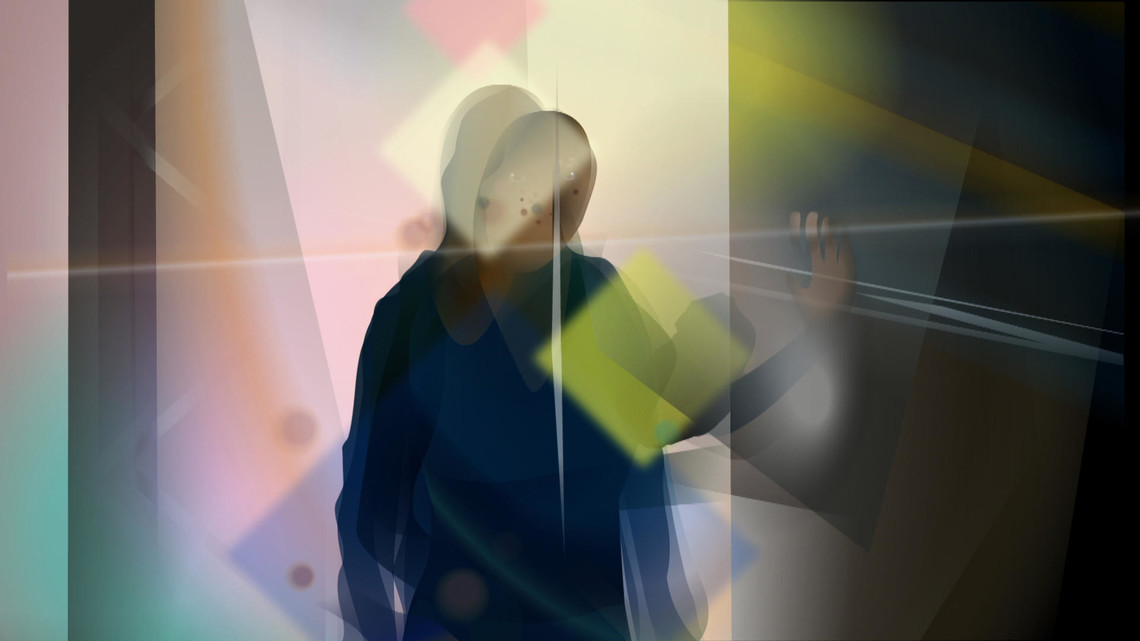 Jangbar is a single screen gallery work, shot on 35mm on location in East Africa, specifically Zanzibar and Kenya. The film takes as its starting point the trade and immigration routes between India and Africa. Jangbar will use research and real events to create a fictional film, formed around a non-linear narrative told through sound and image. The filming focuses on architecture and landscape, as well as the body, language, voice and dialogue - a new development in the artist's practice.

Jangbar was co-produced with Artsadmin and supported by New Art Exchange Nottingham.

Bhimji is interested in the spaces, micro details and the light of these distant interiors. Light is an intricate, important element of the composition: the stillness has a suspension of everyday life and narrative is defined by mood and mystery and incompleteness.

Zarina Bhimji was born in Mbarara, Uganda to Indian parents, and moved to Britain in 1974, two years after the expulsion of Uganda's Asian community in the Idi Amin era. Bhimji trained in London at Goldsmiths College (1983-86) and The Slade School of Fine Art (1987-89). She was nominated for the Turner Prize in 2007.

The Chimera of M

Entering the unfamiliar space of a stereoscopic digital animation, viewers find themselves behind the eyes of an unseen and distinctly unreliable protagonist. Arriving where he had once lived, he moves through the old haunts seemingly attempting to re-engage with two abandoned relationships, one with a man, one with a woman

The Chimera of M was supported by Elephant Trust and Phoenix Square Leicester.

If Rachel Reupke had pitched her film Wine & Spirits to a TV production company, it might have gone something like this: "Imagine the reality hit 'Several Dates', take a series of scripted studio out-takes from the show, boil them right down and slow them almost to a stop. What is it REALLY like trying to get to know someone? Think of all the awkward pauses, think of this couple, one man, one woman, agonising to speak, think of the struggle to connect at all, and how that might sound and look. Painful! Meanwhile, the drinks they are ordering as they pursue their excruciating courtship take on a supernatural presence all of their own. Will this man and woman manage any type of consequential exchange, or will it eventually be the alcohol that starts talking first? What does alcohol do to a person anyway? Who is asking who, and what are they asking, in this strangely compelling tragedy of manners?".

It is unlikely this pitch would have been successful in a TV environment. Reupke might have been recommended by a kindly exec to try her luck on the experimental art circuit instead. Which is not to say that her art is a failed tv pitch. Not at all. In this case, the tv mood can be both something she pursues, as well as something against whose effect she simultaneously organises.

Rachel Reupke's work considers the trials of everyday life through the smokescreen of commercial image production. She was the recipient of the 2009 Bristol Mean Time residency, and her recent exhibitions include Images Rendered Bare. Vacant. Recognizable. at Stadium, New York, Transformed Land at Foundation Calouste Gulbenkian, Paris and Video, an Art, a History: 1965-2010, at Singapore Art Museum. Recent screenings include LUX New Work UK: Alma Mater at Whitechapel Gallery and Artist's Film Club at ICA, London.

The Wilsonsʼ film explores interconnecting stories from interviews conducted with Chernobyl ʻveteransʼ and with Shevchenkoʼs film crew, 25 years after the Chernobyl incident. The narrative includes the story of the camera that Shevchenko used which became so highly radioactive that it was subsequently buried on the outskirts of Kiev. Shevchenkoʼs surviving camera crew go on a quest to find the buried camera. The film is a reflection on the material nature of film and considers the human impact of disasters such as Chernobyl.

The Toxic Camera was co-produced with Forma Arts and Media.

Jane and Louise Wilson are British artists born in Newcastle-upon-Tyne who work together as a sibling duo. Their art work is based in video, film and photography. The pair completed their fine art education with an MA from Goldsmiths College, University of London in 1992 and were nominated for the Turner Prize in 1999. Jane and Louise have recently exhibited at the British Film Institute Gallery in 2009, the John Hansard Gallery in 2011, and Dundee Contemporary Arts in 2012.