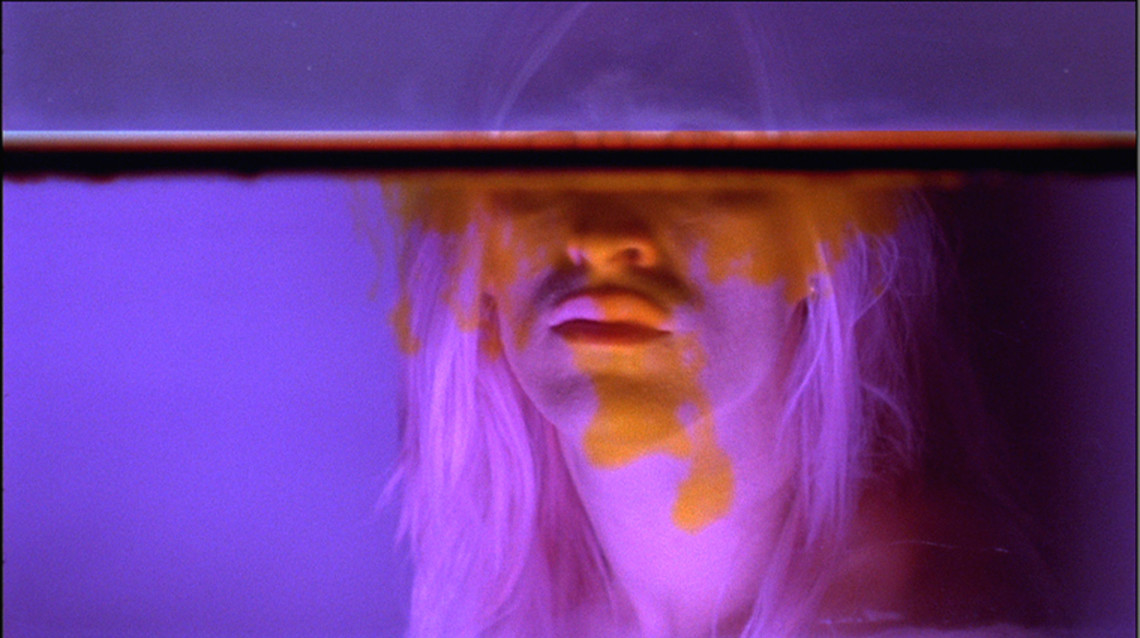 A financier is awoken from a nightmare to learn that a disaster has triggered the investment vehicle called 'Prometheus'. Its designer, the late founder of the bank who is remembered as "the Hippie", has left behind a daughter in her aesthetic reveries.

In this tale of the relationship between generations and nations and visions and investments, The Financial, The National and The Formal seek the story of a structure with the funked-out radar of their word-games.

Working with and across text, song, sculpture, film, animation and performance, Hilary Koob-Sassen creates systems in which these diverse approaches work together to reflect and address the current bio-economic situation through which we are formed as social, physical and political subjects.

Gonda by Ursula Mayer responds to controversial Russian American writer Ayn Rand's play "Ideal" 1937 through a critical reading of aspects of revolutionary modernism, which continue to impact our society today.

The film Gonda stands in counter position to Rand's altruistic standpoint. It aims to take cinematic and linguistic space to their limits by creating 'kaleidoscope spaces' in which images, texts and sounds change position to affect pre-supposed ideals of identity and existence.

Gonda is a performative "film of voices". The script by Maria Fusco rebuilds and re-imagines Gonda through a polyvocal voice and the film features, next to others, Dutch transgender model Valentijn de Hingh.

Ursula Mayer's single and multi-channel film installations are crystalline circuits of images, composed of signs borrowed from architecture, literature, politics, mythology and science. These references cross multiple temporalities, locations and personae. Using the grammar of cinematography and montage, Mayer’s practice strives to indicate how spatial composition, human choreography and narrative construction inform and contribute to one another. Through her poetic treatment of film Mayer interweaves myth, biopolitics and the semiotics of cinema to visualize upon future posthuman ontology.

She is the 2014 recipient of the Film London Jarman Award for experimental film and the Otto Mauer Prize in 2007. She currently lives and works in London and Vienna. She graduated in 1996 at the Academy of Fine Arts, Vienna and completed her MFA at Goldsmiths University London in 2005.

The Wanderer is the story of Gregor Samsa, a fumbling, scruffy hero, who flees his parents' African hairdresser with his lover Betty. But tragedy, confusion and a motley set of characters await. Adapted from a translation of Franz Kafka's Metamorphosis, by artist Rory Macbeth (who doesn't read German), this lurid, sticky and mischievous plot shadows Gregor and Betty as they fall in and out of love.

Flicking from scripted deliveries and emotive locations to impromptu, droll exchanges The Wanderer hijacks Kafka, Macbeth and un-suspecting passers by, spitting them out a little worse for wear. The Wanderer skips in and out of time, tying and unraveling cinematic genres as it goes, before coming to a serene, snow filled close.

Language – in its broadest sense – permeates the video, sound, installation and performance work of Laure Prouvost. Known for her immersive and mixed-media installations that combine film and installation in humorous and idiosyncratic ways, Prouvost’s work addresses miscommunication and ideas becoming lost in translation. Playing with language as a tool for the imagination, Prouvost is interested in confounding linear narratives and expected associations among words, images and meaning. She combines existing and imagined personal memories with artistic and literary references to create complex film installations that muddy the distinction between fiction and reality. At once seductive and jarring, her approach to filmmaking employs layered storytelling, quick edits, montage and wordplay and is composed of a rich, tactile assortment of images, sounds, spoken and written phrases. The videos are often shown within immersive environments which comprise found objects, sculptures, painting and drawings, signs, furniture and architectural assemblages, that are rendered complicit within the overarching narrative of the installation.

In Tenant, the family home becomes the stage to re-enact a scripted dialogue that takes as a starting point a story about Mrs. Schumacher who was the lodger of the artist's grandfather in Berlin during the Second World War. She was a communist and helped Vladimir Lenin travel from Switzerland to Russia in 1917 after the February Revolution broke out. The relationship between language and physical movements explores roles that these two elements play in the creation of knowledge and social relations.

In Tenant, the family home becomes the stage to re-enact a scripted dialogue that explores the construction of social relations.

Tenant was co-produced by City Projects with support from Collective.

Grace Schwindt is a German artist based in London. She is represented by Zeno X Gallery in Antwerp and distributed by Argos Centre for Art and Media in Brussels. She studied Photography at the University of Westminster and Fine Art at the Slade School of Fine Art in London. Recent solo exhibitions have been held at White Columns Gallery in New York, Collective Gallery in Edinburgh, Void Gallery in Derry and Wiels - Centre for Contemporary Arts in Brussels where she was also part of a one year long artist in residency in 2012. Performances and screenings have been presented at the Institute of Contemporary Arts in Glasgow amongst others. In 2012, Schwindt received the Grant to Individual Artist for Performance Art and Theatre from the Foundation of Contemporary Arts in New York and in 2013, an ArtsAdmin Artists Bursary.

Fulll Firearms is a story of a house build to deliberately disorientate its inhabitants. The narrative touches upon themes of displacement and storytelling, and stands in the tradition of melodrama. The characters find themselves constantly having to adjust their expectations of each other so that they might be able to communicate within each other's logic. In her films, Emily Wardill creates situations that examine conditions of precarity in society and how these affect people's relationships with each other. Her films are fostered by improvisations and workshop sessions, that are set up by the artist to develop themes and characters in a collaborative manner.

"Fulll Firearms reframes the history of arms heiress Sarah Winchester in a contemporary context where her haunting is not limited to America and the specter of its own violence en route to manifest destiny, but rather is inundated with the scope of the contemporary international arms trade and the nations that bear the brunt of its success. The house in the film produces an echo, because those who occupy it articulate their voices in relation to the making and writing of a history. Tracing the echoes of actions through the production of social spaces does not remain solely within the diegesis of the film. Instead, it extends to the exchange initiated by Wardill with her collaborators as they produce a film together, and also attempt to implicate the viewer in a film that is also a body - one that is constantly living and growing." - Jacob Korczynski, 2011

Fulll Firearms was co-commissioned by If I Can't Dance, I Don't Want To Be Part Of Your Revolution, Serpentine Gallery, and Film London's FLAMIN Productions. It is co-produced by FLAMIN Productions and City Projects with support from M HKA, Antwerp, Badischer Kunstverein, Karlsruhe and FRAC Champagne-Ardenne, Reims.

Wardill currently works as a Professor at Malmo Art Academy, Sweden and as a visiting tutor at Maumaus, Lisbon.